They aren’t single-family homes for sale. They aren’t condos sharing common walls. They aren’t multi-story apartments with tenants above or below you.

They are something new to Southwest Florida, communities of single-family homes, sometimes called horizontal apartments, for rent only. The first one, The Odyssey by Soltura, opened July 1 with 129 units on Forum Boulevard east of Interstate 75. It’s not going to be the last.

“We are early in the development cycle, said Soltura co-founder Danville Leadbetter. “We are not alone in this.”

There are at least three other developers building or with plans to build rental home communities in Lee County.

Single-family rental apartments have been edging toward Southwest Florida for a decade.

The idea got started almost by accident. A group of entrepreneurs built some single- family apartments in Tucson, Arizona, around 2008, during the real estate bust.

They thought they would attract mostly people who had bad credit. They were wrong. The people wanting to rent had great credit, they just didn’t want to buy a house. An idea was born. 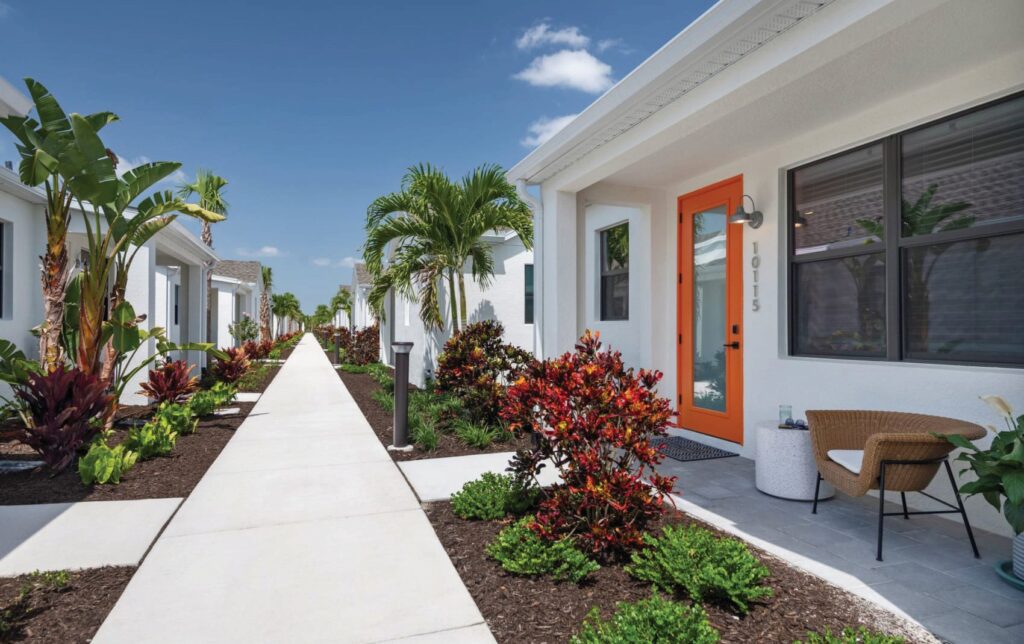 Renters don’t have to share entrances. Everyone has their own private entrance. PHOTO BY SHELDON ZOLDAN / SPECIAL TO FLORIDA WEEKLY

The group formed NexMetro in 2012, a builder focused on single-family rental communities. It has 42 communities completed, under construction or in development scattered across the Phoenix, Arizona, suburbs, in Colorado, Texas and now in Tampa, said Jacque Petroulakis, executive vice president of marketing and investor relations for NexMetro.

A friend of Soltura’s Leadbetter living in Frisco, Texas, turned him on to the idea. Mr. Leadbetter checked out a NexMetro community in Texas and liked it. He and his business partner Arron Simon decided to try it in Fort Myers. Halstatt Real Estate Partners in Naples provided the equity funding.

Halstatt pivoted to single-family rentals in 2019, said Steve Iannaccone, principal owner. It has invested in four projects in Florida, one in Texas and one in Ohio.

The story is similar for Peter Olesiewicz, principal at Marquesa Capital Partners. He’s building the Villas of Gulf Coast off Alico Road. He saw single-family rentals as something different.

Some, often baby boomers, don’t want to be burdened with the responsibility of owning a home. The Wall Street Journal in 2019 analyzed census information and found 19% of people with six-figure incomes rented, compared to 12% in 2006.

Some are renters who just moved to the area and don’t know where they want to buy or build a house, so they take a year to explore.

Some are single professional millennials who aren’t ready to buy a home and others are going through life-changing transitions, like a divorce or death of a spouse.

Some have no choice. Many young families can’t afford to buy because they are still paying off student loans, they don’t have the money for a down payment and now mortgage rates are increasing.

“It’s a solution for would-be homeowners who are priced out of the market,” Mr. Iannaccone said.

Most single-family home rental communities have similar footprints. The homes are unattached except for the one-bedrooms, which share one wall. They don’t have people above or below them. They don’t share hallways or entrances and they have more outside space.

Developers build about 12 single-family rental units per acre compared to five per acre for a regular single-family community and 20 or more for a multi-story apartment.

The homes usually range from 750 to 1,250 square feet. They have 10-foot high ceilings, high-end kitchen counters, 8-foot doors, plenty of windows and top-of-the-line appliances, items you would find in any upscale non-rental home.

“It feels like your own tiny home,” said Alexis Strafuss, 24, who lives at NexMetro’s Avilla at Suncoast near Tampa. “It feels so elegant.”

She said it is much better than the townhouse and apartment she rented.

She grew up in a 6,000-square-foot home but said her 750-square-foot abode doesn’t feel much different. The biggest difference is “it’s just me with the same luxuries.”

The builders love to emphasize the small backyards where people can let their dogs out. That was important to Mr. Strafuss, who has two dogs.

“The backyard is not huge, but it’s perfect to let the dogs out at 10 at night,” she said.

The backyard was a magnet for Joe Altepeter, a doctor who recently moved into the Odyssey on Forum Boulevard. He said he’s been living in apartments for the past four or five years in Indianapolis and Naples.

The backyard is a timesaver for him. He can let his Dalmatian out in the yard instead of having to walk her all the time.

He said the rent for his one-bedroom is about the same as he was paying in Naples, but the quality is better.

Ms. Strayfuss found that her rent was a little higher than a regular apartment, but she said you get more for the money.

Mr. Olesiewicz said the cost to build the single-family rentals are more expensive than building a multi-story apartment, but “you hope to get a little more in rent.”

Mr. Leadbetter said Odyssey’s rents are 10 to 15% higher than most of the local highest-rent luxury multi-story apartments.

About half of the 129 units are finished. Mr. Leadbetter said he’s been adding five to seven renters a week. The grand opening is set for 5 p.m. Sept. 15.

“You have to market the rentals at the property level.” he said. “You have to get people there. You need to show people what it is.”

Renters won’t need to be educated for long. The communities are sprouting up all over Florida.

The number of built-to-rent homes increased 30% across the country from 2019 to 2020, according to The New York Times.

Mr. Olesiewicz said there are now about 30 to 40 communities being built or planned in Florida. Besides its Alico Road development, Marquesa has a parcel in Venice, another in Pasco County and is working on a few others.

NexMetro has more projects scheduled for the Tampa and Orlando area.

The Odyssey by Soltura on Forum Boulevard north of Colonial Boulevard opened on July 1. The community has 129 one-, two- and three-bedroom homes. The grand opening is Sept. 15. Soltura is building 160 two-story rental homes next door and 139 two-story rentals on School House Road, with construction planned for early next year. A longer-term project is 200 rentals on Terry Street in Bonita Springs. Soltura also is building rental homes in Northwest Arkansas.

Marquesa Capital Partners, based in Fort Lauderdale, recently started building the Villas of Gulf Coast on Alico Road, about a mile east of Ben Hill Griffin Parkway. The project includes 140 single-family rentals. The first homes are expected to be ready by the third quarter of 2023, with the completion date in 2024.

The Woodlands at Portofino Vineyards will be the third phase of PMG Assets’ development along Three Oaks Parkway in south Lee County. The first two phases are conventional apartment buildings. The final phase will include a community of single-family homes and townhouses, said Brandon Skinner, director of multifamily for PMG Assets of Hollywood, Florida. The homes will be larger than those being built by Soltura and Marquesa. The company also is building a community of more than 100 townhouse rentals in Collier County.

The Atlanta-based builder ResiHome owns several rental home communities in Lee County, but they differ from the single-family communities gaining popularity. The homes are much larger. Their website touts four rental communities. Greenwood Villas, near San Carlos Park, Caloosa Creek in Fort Myers and C5 Residences at Gateway are three-bedroom townhouses. Crane Landing is a community of large single-family homes with four to six bedrooms. The company didn’t return numerous phone calls asking about their developments.