Once, Nancy Lake worked as a social worker, a counselor for Phoenix families in crisis. She saw how problems would pile up, how quickly people could find themselves on the street.

But, at 70 years old, Lake never thought she would find herself facing homelessness, trapped in the kind of “devastating situation” she had seen her clients face for years.

At the beginning of June, Lake’s landlord taped a letter on the door of her apartment in east Phoenix. If she wanted to renew her lease when it expired in August, the letter said, she would face a monthly rent increase of $462. For three years, Lake had paid around $1,350 a month for a modest two-bedroom apartment for herself and her adult son, who is disabled.

“I’m pretty scared right now,” Lake told Phoenix New Times last week. She doesn’t have that kind of money. Moving is expensive, and affordable apartments are hard to find. Every morning since that letter arrived, Lake said, she wakes up and thinks: “What can I do today to get out of this?”

Nancy Lake holds the rent renewal notice given to her by Decron Properties.

Lake’s story is a common one these days in Phoenix. Rising rents are the casualty of a white-hot real estate market, in turn propelled by an influx of new residents to Phoenix. Figures from Rent.com, which aggregates rental price trends in markets, show that in the last year, the average price for a one-bedroom apartment in Phoenix has increased by nearly 40 percent. Investors have rushed into the Phoenix market, buying up not just luxury rentals but trailer parks and affordable housing.

Ascent at Papago Park, Lake’s apartment complex, is located at Van Buren Avenue and 51st Street. The rush of development is pronounced in this slice of Phoenix. Cranes stretch over empty lots nearby. New, modern developments loom over shabby convenience stores and auto shops.

In March, Ascent at Papago Park sold for $107.5 million. The buyer was Decron Properties, a real estate investment firm based in Los Angeles.

Decron, as one industry newswire put it, has gone on an “acquisition spree” in Phoenix over the last year. The firm bought its first property in the state in May 2021 — a 276-unit apartment building in Tempe. Now, one year later, Decron owns eight properties — and more than 2,100 units — across the Valley. Decron did not return multiple calls and emails from New Times seeking comment.

For its residents, for years, Ascent provided relatively affordable housing. For a real estate tycoon, though, the apartments looked like a good investment. The complex is gated, with 270 units. From some vantage points, the red sandstone buttes of Papago Park jut out on the horizon. After Decron bought the apartments, they added a new tagline: “Luxury apartment living.”

Phoenix, Decron Properties wrote in a press release after the sale, was a lucrative place for such investments. There was “pent-up demand for living space” with the influx of new residents into the city, which meant that rents could rise rapidly, yielding “as much as 20 percent in rent premiums.”

For Lake, it’s closer to a 40 percent rent hike.

In the release, Decron outlined its plan to quickly jack up the value — and income — of its new acquisition. First, it would fix up landscaping and amenities. Then, it would renovate each unit. “We’re confident,” CEO David Nagel wrote, that the Phoenix market would ensure “our ability to meet or surpass our investment goals.”

Decron is perhaps the archetypal bogeyman in Phoenix‘s housing market: an investment firm in California buying up hundreds of millions of dollars worth of multifamily housing. Such firms have inspired slogans like “Don’t LA My PHX” (coined by one local realtor). They are easy scapegoats.

David Leibowitz, spokesman for the Arizona Multihousing Association, hesitated to place the blame on firms like Decron, however. “I’ll tell you that generally rental homes and apartments have always been investments, whether by a mom and pop, a pension fund, or a home builder, regardless of geography,” he wrote in an email on Thursday.

“The Valley and the state are in the midst of a massive housing supply crisis. This crisis — along with cities, towns, and NIMBY [Not In My Backyard] neighbors standing in the way of new homes being built — is directly responsible for driving up rents,” he said.

Of course, as Decron acknowledged in its announcement of the sale, the heightened demand for housing means big profits for investors. And strife for renters.

Ken Volk, founder of Arizona Tenants Advocates, said Lake’s situation was all too familiar in his line of work. All day, Volk fields a flood of calls from tenants across the Valley, seeking help breaking leases or dealing with maintenance issues. There was a point in the last year, he told New Times, when the majority of those calls were about rent hikes. That’s slowed some now, he thinks because the wave of rent hikes has already crested at many apartment complexes.

“Sometimes the rents are almost doubling,” he said. Lake’s nearly $500 increase was on the high end — but  certainly not unusual. “It’s a good time for landlords now.”

Ascent at Papago Park was once affordable. Then, it got the attention of a California real estate giant.
Katya Schwenk” class=”uk-display-block uk-position-relative uk-visible-toggle”> click to enlarge 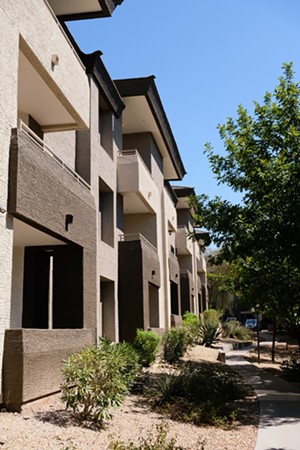 Ascent at Papago Park was once affordable. Then, it got the attention of a California real estate giant.

Lake’s family has lived in Arizona for generations. She grew up in Phoenix, and lived for a time in Sedona before returning to the Valley. Over lunch last week, Lake told of hardships that she encountered in her life. One of her two sons died in 2006, when he was a young adult living in San Diego. Her other son is now in his 40s, but cannot work; he has schizo-affective disorder. He had worked odd jobs over the years, for a time as a bagger at a Fry’s Food and Drug supermarket. But those jobs never lasted long.

Just a year or two ago, Lake said, she was hopeful about her future. She received a master’s degree in counseling in 2016. “I felt I had a good 10 years left to work,” she said.

Then, the pandemic hit.

Through her years as a counselor, Lake said, she saw how the social services system sometimes failed those in need. She recalled seeing nonprofit CEOs with cushy salaries, while programs were strapped for funding. “A lot of times, it’s like putting a Band-Aid on a problem,” she said. Families were dealing with systemic homelessness.

She saw how issues would “pile on” for people, until they found themselves on the streets. Lake sees this pattern in her own life. She has been hospitalized several times since the start of the pandemic. When she came down with COVID-19 in January 2021, she found herself still unable to work after recovering from the worst of the virus, and was forced to quit her job. This May, Lake was hospitalized again with the flu.

Her son gets a few hundred dollars a month in disability pay, and Lake has some retirement income. Her ex-husband, until this summer, had been helping support the two as well. But recently he found himself in financial trouble and hasn’t been able to send them money. “It’s like a domino effect,” Lake said. The friends and family she thought she could once rely on for financial support had started to struggle with inflation and cost-of-living hikes.

“I was on a panel about homelessness once. We were brainstorming great ideas,” Lake said, pausing for a moment. “I guess they don’t happen.”

When Volk, the tenant advocate, gets calls from people in the same situation as Lake, there’s little advice he can give them. “I give them the statute that says the state is the sole party to regulate rent,” he said. “And the state chooses not to.” He joked, wryly, that Arizona might as well be telling them to “go sleep under a bridge.”‘

Lake said she has been calling around, looking for options. She has spoken to nonprofits about assistance with housing for her son, and spoken to the city of Phoenix about possible rent relief. It has all been difficult to navigate, she said. Nothing, so far, has come through.

On Tuesday, Lake sat at her dining room table, amid stacks of medical bills and other paperwork, feeling overwhelmed, she said. She wasn’t sure if she could even pay the July rent, which was due on Thursday. She went through the options facing her: She could ask her brother for money, or for a room; she could try harder to find a more affordable place; or she could try to bargain with the property manager, but so far, they hadn’t been responding.

“What scares me is this is not an isolated incident,” Lake said. If she moved somewhere new, how long would she have until the rent went up again?

“I feel like homelessness is breathing down my neck,” she said. 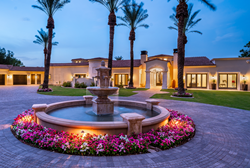 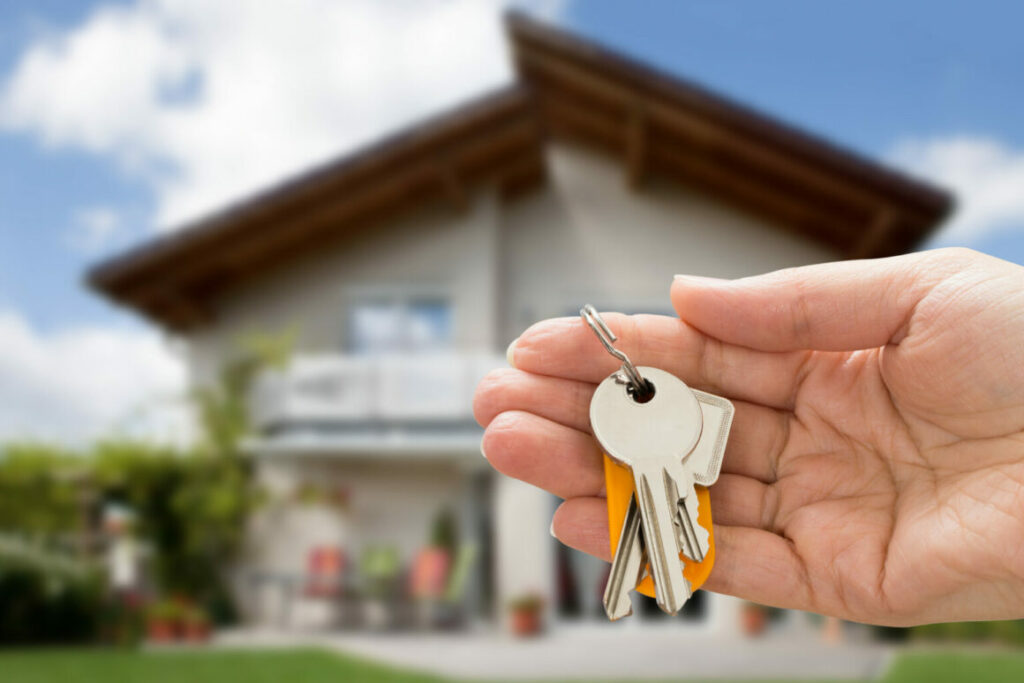