A political action committee supporting Maricopa County Attorney Rachel Mitchell — and largely funded by owners of the Arizona Diamondbacks and Arizona Cardinals, as well as other local business tycoons — is facing criticism for a racially charged attack ad that targets the campaign manager for Mitchell’s opponent.

But recent yard signs take the attacks on Franks to a new low. The signs feature a mugshot of Franks and cite four criminal charges. The image appears with the words “Julie Gunnigle’s poor judgement” and a demand for “law and order.” But what the signs don’t say is that Frank’s arrest and the criminal charges were part of a sweeping corruption scandal that engulfed the county attorney’s office, prompted the resignation of Mitchell’s predecessor, and paved the way for Mitchell to get the job.

In October 2020, Franks was one of a group of demonstrators against police violence booked in a mass arrest by the Phoenix Police Department. More than a dozen, including Franks, were charged as a criminal street gang for their use of a political slogan and faced a slate of bogus criminal charges.

After months of public outcry, the charges against Franks and the other protesters were dropped. But the fallout from the scandal has continued. In 2021, the U.S. Department of Justice announced it was investigating the Phoenix Police Department and has looked closely at the gang charges protesters faced. When Mitchell took office, she fired April Sponsel, who was lead prosecutor on the case, and has said she felt the protesters were “overcharged.”

Those dropped charges are displayed on the signs, right beside Franks’ mugshot: assault on an officer, resisting arrest, unlawful assembly. The signs cite a report, ironically, by ABC15 journalist Dave Biscobing, whose investigations exposed that the charges against the protesters were fictitious.

Mitchell has distanced herself from the signs — highlighting that they were not the work of her campaign but rather that of the Arizona Liberty Coalition, a political action committee working to elect her. Her campaign did not respond to New Times‘ inquiries, but it did provide a statement to the Arizona Republic’s Elvia Diaz: “Our campaign isn’t responsible for the signs. We don’t condone the content and hope they are taken down.”

The Arizona Liberty Coalition’s largest donors are Arizona Diamondbacks owner Ken Kendrick and local auto tycoon Larry Van Tuyl, who together provided the PAC with $200,000 of its $369,700 total funds raised this election cycle. Arizona Cardinals owner Michael Bidwill and Bennett Dorrance, one of the founders of Scottsdale-based luxury real estate developer DMB Associates, chipped in $25,000 each. The coalition, the Cardinals, and Diamondbacks did not reply to requests for comment from Phoenix New Times.

The signs were posted near the home of Bruce Franks Jr., and touted bogus criminal charges that were part of a scandal in the county attorney’s office.
Bruce Franks Jr.” class=”uk-display-block uk-position-relative uk-visible-toggle”> click to enlarge

The signs were posted near the home of Bruce Franks Jr., and touted bogus criminal charges that were part of a scandal in the county attorney’s office.

Franks told New Times that he believed the signs reflected on Mitchell directly, even if a PAC created them. “How are we supposed to believe that she can lead this office in a way that truly benefits Maricopa County residents? Specifically Black and brown residents,” he asked.

The signs appeared this week clustered near his home in a conservative, largely white suburb in the East Valley, Franks said. By the time a reporter visited on Tuesday, the signs were gone. But another neighbor confirmed to New Times that the signs were placed in the area. The signs are a real threat and safety concern for his family, Franks said.

“You take a mugshot of a Black man and plaster it around with no context, no anything, in a predominantly white community that I live in — that’s dangerous,” he said.

Gunnigle blasted her opponent for the signs. “First, to personally attack campaign staff incites hate, it drives misinformation, and it compromises their safety,” Gunnigle said in a video posted to social media on Sunday. “Second, this person was exonerated.” She compared the signs to ads featuring Willie Horton, which stoked racist fearmongering in the 1988 presidential election.

Gunnigle noted the irony that the scandal around the charges Franks and others faced was the driving force in the months-long and ultimately successful campaign by local activists demanding that former County Attorney Allister Adel resign. Mitchell, a longtime prosecutor in the office, was appointed to replace Adel in April.

Franks said that his arrest — and the bogus gang charges — was a harrowing experience and one that shaped his understanding of the power of the county attorney’s office. “I was facing decades for exercising my First Amendment rights. And I saw what this office tried to do. I saw the politicos that support this office and the politicos that don’t want to speak up. I saw what they tried to do to us, how they tried to silence us, and how they tried to mess up our lives,” he said. 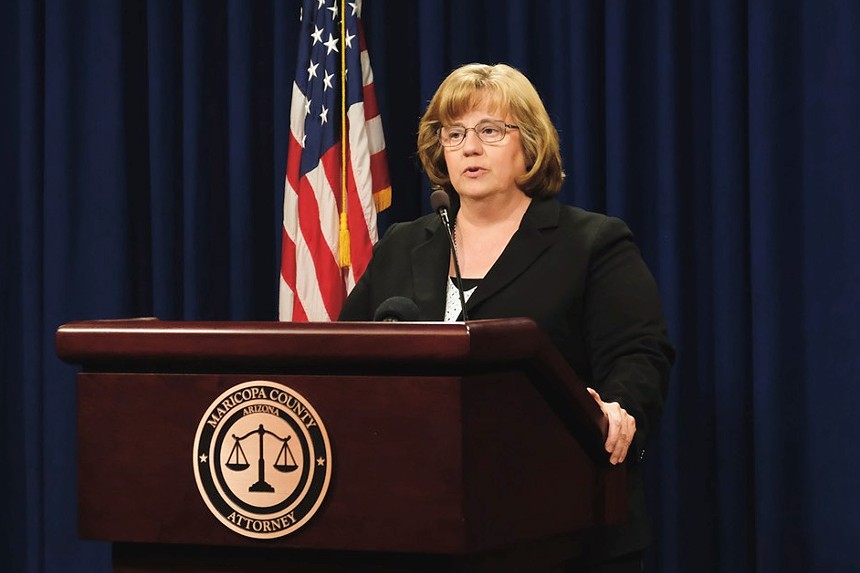 County Attorney Rachel Mitchell has distanced herself from controversial ads targeting the campaign manager of her opponent.

‘I’ve Watched Rachel Mitchell Drag My Name Through the Mud’

Before the latest attack, Mitchell had made Franks a focus of her campaign.

He is Gunnigle’s highest-paid campaign consultant, according to campaign finance records, and is a well-known activist in Phoenix. Originally from St. Louis, Missouri, Franks gained national prominence as an activist during the 2014 protests in Ferguson over the police killing of Michael Brown. In 2016, he was elected to the Missouri General Assembly.

Franks resigned at the end of the 2019 legislative session and cited mental health issues. The year before, he lost a close friend and a godson to gun violence, he said, and the deaths had taken their toll. “Everybody from where I’m from, and my family, knows that I resigned from office because I was suffering from depression and anxiety,” he said. “I gave a very heartfelt speech on the house floor.”

Mitchell has highlighted the political troubles that Franks faced in office. “Bruce Franks Jr. stepped down from his role in Missouri because of financial irregularities in his campaign,” she said in a September 9 debate. She called him “about as corrupt as they get.”

Franks received a $14,000 fine for spending $2,000 of campaign funds on personal expenses during his time as a lawmaker. The investigation into his finances didn’t conclude — or even become public — until months after he resigned, and he has been adamant that his stepping down was unrelated.

Also in September, a collection of past tweets from Franks that used homophobic slurs and contained misogynistic comments — all posted between 2009 and 2012, when Franks was in his 20s — resurfaced after a conservative activist in Maryland posted screenshots of them on Twitter. Mitchell called the tweets “vulgar.” Franks, now 38, posted a video apology and said he has “spent my personal and professional life apologizing through action, not just words” for the language.

Gunnigle has distanced herself from past calls by her and Franks to reduce police funding. She claimed in a recent debate that she had never advocated reducing the Phoenix Police Department’s budget, though she had tweeted about doing exactly that. Franks has not hedged on his beliefs and has continued to attend and speak at protests about Phoenix police.