If you live in one of metro Phoenix’s posh neighborhoods like North Scottsdale or Fountain Hills, chances are you have a taste for ritzy spas, well-manicured fairways, upscale shops, and sumptuous restaurants.

And chances are, a whole lot of your neighbors hate you.

A recent study found that Arizona hates rich people more than any other state. And with the richest 1 percent controlling nearly as much of the global wealth as the other 99 percent combined, maybe that’s not entirely surprising.

The new research published on May 12 comes from Online Money Advisor, a global finance data clearinghouse based in the United Kingdom. Researchers analyzed more than 50,000 geotagged tweets from this year mentioning billionaires, and weighed how negative or positive each tweet was.

“Arizona is the state which dislikes the super-rich the most in the U.S.,” declares a recent email in revealing the study’s conclusion, based on a list of cities that love to hate the richest of the filthy rich.

As the only state with three cities — Tucson, Mesa, and Phoenix — in the top 10 list of American municipalities that hate billionaires the most, Arizona earns the No. 1 distinction.

Tucson and Mesa harbored the most hate, ranking in first and second place, respectively, among nearly 20,000 cities. In Tucson, nearly 70 percent of tweets about billionaires contained acrimonious language.

Arizona is full of rich people, and people who hate the rich. That’s because of Arizona’s ever-widening wealth gap, says Tom Rex, associate director of the Center for Competitiveness and Prosperity Research at Arizona State University.

“If you have a large segment of the population that’s not doing well but see others doing well, it will cause resentment,” Rex says.

More than 7 million people call Arizona home, but much of the state’s wealth is concentrated inside a town of just 14,000.

With an average household income of well over $300,000 and an average home value of nearly $4 million, Paradise Valley is the wealthiest place in Arizona.

PV also ranks No. 14 among the wealthiest localities in the United States.

The town has been home to celebrities like Emma Stone, Michael Phelps, and Alice Cooper. Plenty of other big names including Ice T, Charles Barkley, and Danica Patrick live elsewhere in the Valley.

Nothing wreaks of wealth like riding your horse down the artificially lush, gleaming streets of Paradise Valley.
Dru Bloomfield” class=”uk-display-block uk-position-relative uk-visible-toggle”> click to enlarge

Nothing wreaks of wealth like riding your horse down the artificially lush, gleaming streets of Paradise Valley.

Hop on Route 60 headed east, and you’ll see another side of Arizona.

Around 180 miles northeast of Paradise Valley is Whiteriver, situated on the Fort Apache Indian Reservation. It’s a town that in 2016 had an unemployment rate of 53 percent.

Then there’s Bapchule, just a 30- to 40-minute drive south of Phoenix on the Gila River Indian Reservation, where the average household income three years ago was barely over $11,000.

But one metro area, Tucson, exemplifies both sides of the wealth gap in Arizona, and it’s the most billionaire-hating city in America.

Catalina Foothills, a suburb just north of Tucson, is the city with the worst income inequality in Arizona, according to the U.S. Census Bureau.

The bureau uses a measure of income inequality expressed on a scale that ranges from zero to 1, where zero represents perfect equality and 1 represents the highest level of inequality. On that scale, Catalina Foothills has the highest coefficient of any city or town statewide.

That’s where “the most expensive home in Tucson,” a palatial hacienda-style compound on 50 acres, sold for a record-setting $4.45 million just two months ago.

Nearby Tanque Verde, also a North Tucson suburb, is the most educated locality and one of the wealthiest in the state. Yet Tucson has a national reputation for destitution.

“It’s not a coincidence that Tucson is No. 1 on that list,” Rex points out.

The city is home to some of the most opulent and most derelict neighborhoods in the Grand Canyon State. It’s also more politically liberal than much of the rest of Arizona, Rex contends.

In a 2020 report, Pew Research Center claimed there are 28 states with worse income inequality than Arizona. But that study failed to take one key issue into account that’s unique to Arizona, experts say.

“We have so many people with second homes in Arizona,” Rex says. “They buy and build big, expensive homes, but they aren’t considered Arizonans. If you could include those seasonal people, we’d rank worse than we do.”

According to the Arizona Office of Tourism, more than 100,000 Canadians spend winters in a second home, condo, or timeshare in Arizona.

Even more domestic part-time residents flock to Arizona in the winters from colder states, especially the Midwest, Pacific Northwest, and the upper Rockies.

During the winters, some of the most affluent people in Arizona are not Arizonans at all.

“The housing market is seeing rapid increases in value right now,” Rex says. “The rich people are the ones benefiting from that. If you’re not a homeowner, you’re not seeing a dime.”

Young, wealthy people are increasingly choosing to follow the example of the omnipresent pronged saguaro cactus, and plant their roots in metro Phoenix and Tucson. And yet, young folks are the most likely to resent the rich, a 2019 survey shows.

It’s a dichotomy between the young poor and the young rich, who are “a vocal minority” online, according to Phoenix-based social media guru Terry Kurtzer.

“People like to spew hate on social media because there’s nobody around to punch them in the face,” he says. “They hide behind screens with no consequences until one of the platforms shuts them off.”

“I think social media skews a response to inflammatory topics,” he offers. “Haters are gonna hate. The people who couldn’t care less aren’t engaging with those topics online.”

Zillow estimates that the Comescu House in Sedona is worth as much as $5.8 million.
Al Hikes AZ via Flickr” class=”uk-display-block uk-position-relative uk-visible-toggle”> click to enlarge 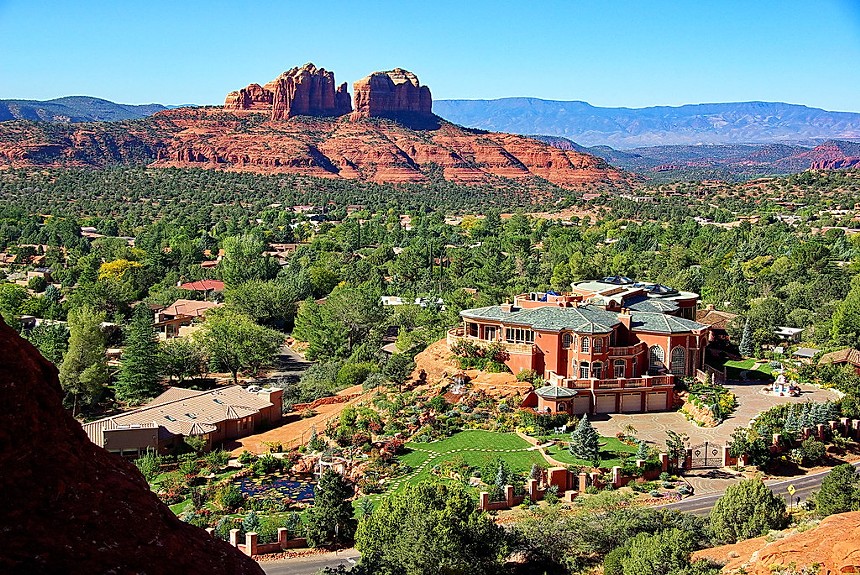 Zillow estimates that the Comescu House in Sedona is worth as much as $5.8 million.

Stephanie Tepper, a graduate student at Cornell University in New York and researcher for the Online Money Advisor study, suggested it was neither healthy nor necessary to fixate on how and where the super-wealthy spend their money.

“We may see the opinions and attitudes of billionaires as a source of authority, especially on topics like investment,” Tepper says. “The tweets of billionaires — likely posted without much thought for the more average people in the world — should probably not be taken as authoritative advice.”

But viral billionaires like Elon Musk, who recently bought Twitter, have massive influence in the online space to the point where even their tweets can drastically affect the stock market.

The stock market might be “a rich man’s game,” says Rex, the local economist, but that doesn’t mean you should avoid taking an interest in the dalliances of Musk or Amazon founder Jeff Bezos, who was named the world’s most hated billionaire in last week’s study.

“It ends up having an impact on you,” Rex states. “The stock market is distant to most people, but it influences the health of the economy, which spreads to everyone else.”

“We continue to have policies that, in essence, foster greater income inequality in Arizona,” he says. “I’m amazed that there hasn’t been more resentment in the U.S.”